We were delighted to see that our friends at Labernum Boat Club, www.labernumboatclub.com won a well deserved grant and some recognition of the great work they do with local kids and adults in a feature in the London Evening Standard this week. Here’s the article.

‘The boat club is a sanctuary, where young people can be fed, be safe … be children’

In the middle of Hackney’s urban heartland, wedged between serried ranks of housing estates, there is an unexpectedly thrilling sight: a boat club.

Its tepee-shaped clubhouse rises in a riot of colour while out on the Regent’s Canal, young people whoop with delight as they perform cartwheels, flips and ever more outrageous tricks in their kayaks.

This is Laburnum Boat Club, the creation of Jim Armstrong, 64, a former teacher who “got diverted” by his love of messing about in boats. He founded the club on the site of a derelict Victorian gas works.

Recalling those frantic first days in 1983 he said: “We dredged the basin, built the tepee, opened the doors and the kids from the surrounding estates just poured in — and they haven’t stopped coming since.” 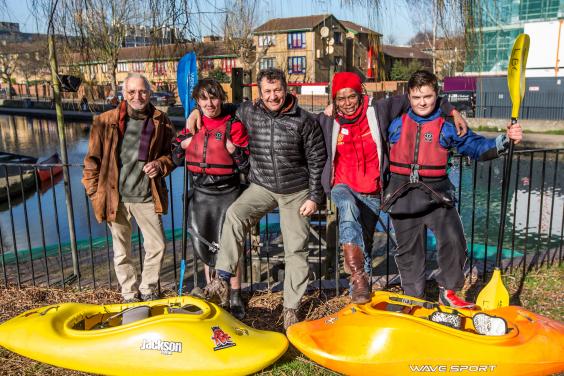 Today the club owns three narrowboats, 15 Canadian canoes and 80 kayaks — all donated — and offers fun and boating skills to thousands of disadvantaged local young people every year, keeping them off the streets and training the most dedicated among them to be boating instructors and skippers.

Now Laburnum Boat Club has won a £5,440 grant from the Evening Standard Dispossessed Fund as part of our The Estate We’re In initiative.

The cash will be used by Laburnum to offer family boating sessions to locals every Sunday, with a choice of narrowboating, canoeing or kayaking.

Mr Armstrong said the grant was a boon to local families under pressure.

What they do: Founded by Jim Armstrong, this youth club provides fun boating activity on the Regent’s Canal to those who could not otherwise afford access, including disabled people, and teaches them to be instructors and skippers.

How grant will be used: To run weekly family boating sessions offering narrowboating, canoeing and kayaking, as well as trips to the Canal Museum.

“There are not many opportunities for cross-generational bonding between children, parents and grandparents — which is especially important where children speak good English but parents don’t,” he said.

“This project allows us to improve social cohesion as well as health and fitness in the community.”

Laburnum’s senior youth worker, Dominic Hinshelwood, 50, said the boat club provided a “de-stress haven” for young people. “A lot of young people who come through our gates are dealing with difficult issues like family breakdown, mental health problems and poverty,” he said.

“This place is a sanctuary, a place where they can have a good time, be fed, be safe and be children. Time seems to stand still on the canal and as you watch life rush by on the towpath, it can be therapeutic.

“Boating is a means to build confidence and maximise their personal development.”

Connor Clarke, 16, who lives with his mother on nearby De Beauvoir estate and is doing his GCSEs, said: “I’ve been coming here three days a week, every single week since I was nine — and I come because I just love it. Kayaking has become my main sport, my special skill.

“I used to compete but now it’s for fun. This weekend I started level-one kayaking coaching, the first step towards my goal to be a kayak trainer. This place has kept me away from local gangs, or rather,” he laughed, “it’s kept them away from me.”

Another local teenager to benefit is Louise Brisley, 19, who said Laburnum had been her second home.

“I had to be out of the house because my parents were out working and so I started coming down from age 12,” she said.

“I made friends and kept coming back because the staff made the effort to get to know me and it brought out the best in me and now I’m a level-one kayaking coach — giving back to young people like me.”

Rose Parnis, 48, the club’s senior skipper, teaches young people to pilot narrowboats and paid tribute to their passion. “In winter I’ve seen youngsters crack the ice to go out kayaking on the canal, that’s how into it they are,” she said.

“Half our staff have come up through the ranks — in fact most boating clubs in London have somebody on their staff who was trained at Laburnum, which is testimony to the reach of this small club and how much it achieves.”

Amid Hackney’s booming and also destabilising regeneration programmes, Mr Armstrong takes succour from the fact that the club’s future is secure thanks to a rent-free long-lease from the council.

“We are a valuable resource in the borough, providing kayaking courses for over 1,500 pupils at 29 schools,” he said.

Out in the early evening gloaming on the Regent’s Canal, which runs like a black ribbon across north London from Limehouse to Paddington, I watched mesmerised as Connor and his friends practised “kayak freestyling” — basically gymnastics on water.

One move required him to hold his boat almost perpendicular to the water, then propel himself forward with tremendous force and execute a somersault — from which he emerged wet but triumphant.

I knelt down and dipped my hand in the water. It was absolutely freezing. But judging by the grin on Connor’s face and the focused look in his eyes as he readied himself for another go, he did not seem to mind.

About the Author: BBCo